Writing and the Outdoors

Picnic Dreams of the Pacific Crest

I wake up at 7 (late) after staying awake late last night, from a dream that I met Carrot Quinn and someone took a bad picture of us together. My phone is buzzing- it’s my mom, so I talk to her, half-asleep at first. We Face-time for a good 45 minutes with the rest of my family, too, before I need to get out of bed to go to the bathroom. I would talk to my family for hours if I could. I realize afterwards that it’s also Mother’s Day so I send a text to my mom.

I finish repackaging my food. Macadamia nuts obviously belong in the same ziploc with dried apricots and spicy peas, right? I think I have way too much food but I don’t want to get rid of any of it! I spent so much money on it; I have no idea how much I’ve spent so far total, but food is so expensive. My pack is going to be so heavy and full.

I head downstairs and back up several times, talking with Rachel and Donny and watching the dogs play. A hiker calls from the hostel and Rachel goes to pick him up. It’s David, aka This Way (but everyone calls him Crocs because he hiked in them for several days to let his blisters heal from ill-fitting shoes). He’s from South Korea and carries a Camino De Santiago shell on his blue Osprey pack, and is super nice. Apparently he got the illness a few days back that’s been affecting a lot of the international hikers. I guess there must be a bacteria strain or virus here that isn’t everywhere else? I haven’t heard of any Americans getting sick with it. Or maybe it’s from Hillbilly’s place back at Cabazon; I’ve heard crazy stories about Hillbilly and his house. Apparently he offers everyone moonshine and really strong weed when they get there, and it’s kind of unsanitary. He has a room full of M&Ms memorabilia and lots of guns.

David takes a shower as I pack up and start bringing my things down. Rachel and Donny are driving him to the community church since it’s Sunday, and last minute I decide to go with them so I can get a ride back to the trail. I throw my stuff in either my pack or my plastic grocery bag, fill my water bottles, and head out the door. Just before leaving I put the card I made for them on the kitchen table.

I say goodbye to David as we drop him off, and then they drive me back to the trail. We take pictures, and say goodbye, my eyes getting a bit watery. They’re awesome people and I’m really bad with goodbyes… I sit around the trailhead for an hour or two, updating my blog with the ten days worth of posts that I have backlogged, and get maybe 2 of them up. There is trash everywhere from trail magic that’s been left at the trailhead or from day hikers/thruhiker snack breaks, so I use my empty plastic grocery bag and pick it all up. There’s a Triple-Crowner parked at the trailhead, Stone, who takes the trash. We talk for a long time about trail things.

A car pulls up and drops off a hiker who looks very familiar, who waves and comes over to say hi. I’m always nervous when that happens because it might be someone who I really should know the name of, but have forgotten. But no, it’s a hiker named Twinkle Toes who I’ve only met briefly in passing, and was just happy to see a familiar face after taking 4 days off-trail in LA.

I dump half of my water since I didn’t have time at the house to look where the next water source is and just filled them all up. My pack weight feels immediately better. Then off I hike, with Twinkle Toes for a bit before I stop to pee and fall behind. I think I must be getting my hiker legs, because I’m going fast. I stop to inhale a whole bag of popped rice chips in one sitting.

My knee muscles start acting up again, and as I walk I try to figure out what is happening with it. Maybe it’s the downhill that triggered it? I decide to stop at a campground 8 ish miles in that my paper maps say have a picnic table, which I’m super excited for, but when I get there there are no picnic tables to be seen. The only person I know here is Twinkle Toes. As I cook my dinner, I listen to an AT veteran named Sketch. He says that I shouldn’t call the veggie meatballs with spaghetti I’m making for dinner meatballs; apparently he got an associates in the culinary arts and it’s bad form to call veggie meatballs, meatballs. I ask him what I should call them instead and he doesn’t answer (I will continue calling my vegetarian meatballs whatever I want). My dad made them for me and they are delicious, mixed with ramen noodles and a tube of tomato paste for sauce.

It’s really cold out even though it’s only 6, so after talking with Twinkle Toes for a bit I crawl into my tent and talk to my mom for a while via text and otherwise kill time until I go to bed. 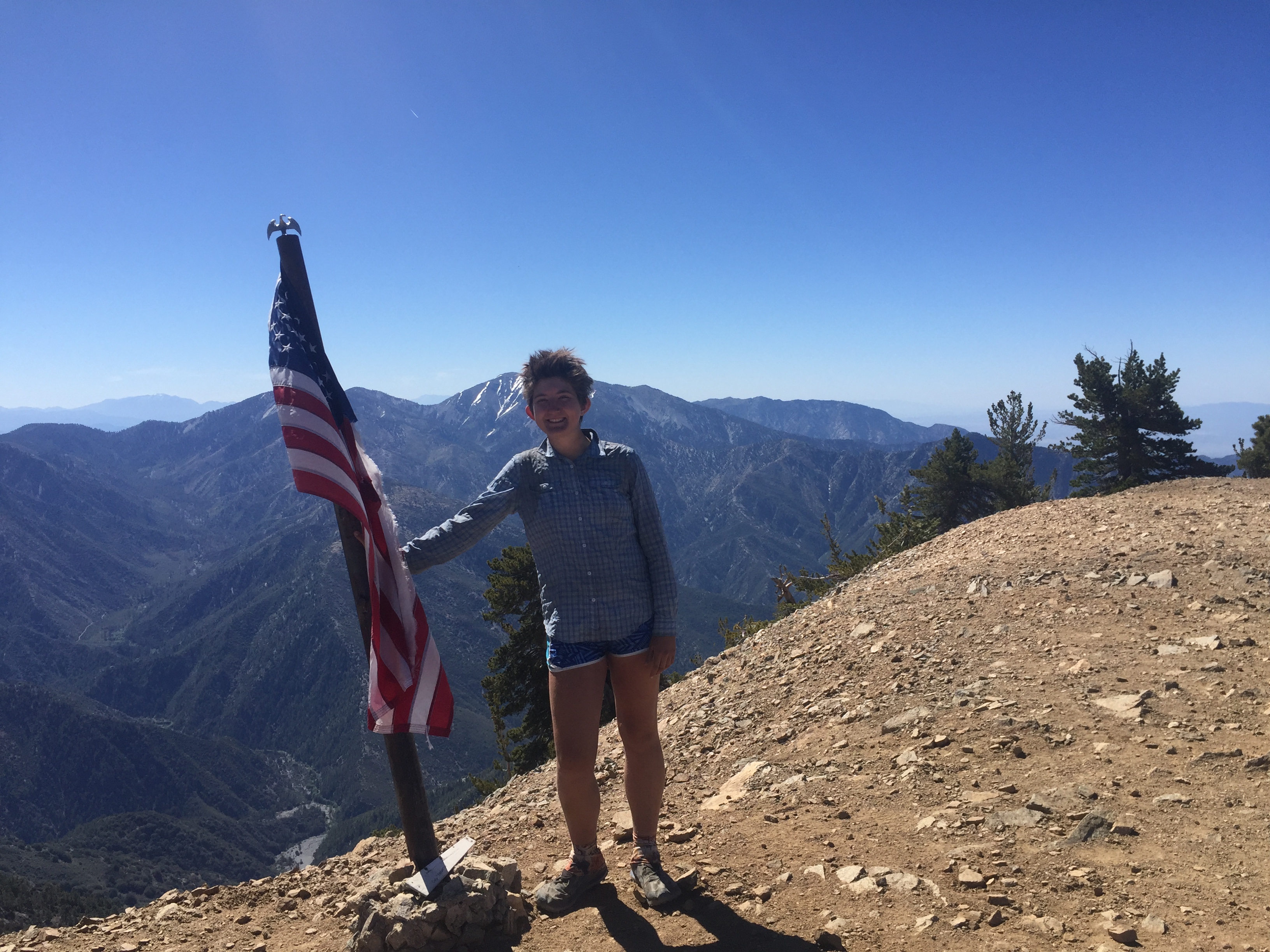 Hi, my name is Amelia, aka Picnic Table when I’m on the trail- I live in Sparks, Nevada where I hike places and write about things. I hiked the Tahoe Rim Trail in 2015, the John Muir Trail in 2016, 622 miles of the Pacific Crest Trail in 2017 before breaking my foot, and the full 2,660 mile PCT shabang in 2019. This blog is both my portfolio and hiking journal.

2019 has been good. I’m excited for 2020. Love you all and Happy New Year! :) ❤️
Just a little scrambling for an ordinary day. 📍Salish Kootenai, Cheyenne and Apsalooké Land
I finished the trail last year today. I remember not sleeping from excitement, crying as I started walking the last couple of miles until I started choking on the stale cookies I was eating for breakfast. I remember the light shining on the mountains ahead of me in Canada, the little rock messages people left on the side of the trail, saying that there was only a mile, only a quarter mile left. Passing by the hikers without entrance permits who had their 30 mile walk back to the road. Hands frozen with cold. The people who were at the monument before me barely acknowledged me when I came up, so I sat quietly and watched as one of them played a song on his ukelele about being freed from his ball and chain; I was happy to have reached the end but the trail was never a burden for me. Them finally leaving and getting to watch my trail family come down the trail and hug that damn monument... Eating cinnamon rolls from Mazama and drinking huckleberry wine and dancing and taking pictures and writing in the last trail register with hands too numb to hold onto pens. Happy Trail Anniversary @asphalpern @laurareport! ❤️
Rad mountains and rad humans @maddy_grubb1 @tuhmix @_gavin_g 📍Apsalooké, Salish Kootenai, Cheyenne, and Sioux Land
I don’t know how I did it but I found some really cool friends already. Montana is okay, I guess... 😣🥰
A little late, because I’ve been at school for half a week now, but I tried to cram as many of the good things into the last week before leaving home as possible. I am now at Montana State University and I’m going to be studying Conservation Biology. Yup. 🤟🏼🦟🦇🌲🌳🐿
Who did it better? This ground squirrel or @asphalpern?
Camping/sword fighting/concert going/boating with the ol’ best friend and her family. She is the cutest. ❤️ @parkie_aiello @daniel_c.nunez @aiellos4
Snow, trail magic, hikers, repeat, repeat. Magic. ✨ @asphalpern @ahabitatoutdoors
Flower boy. ❤️🥰🌸🌼
Twin Falls, Idaho, Shoshone Falls and more hiker friend (this time ‘17 trail angel)! 📍Shoshone/Bannock Territory
It was a good trip to Cape Cod! We spent time with my rad Grandma (OG hiker and backpacker, love you❤️), walked on the beach a lot, played a lot of Scrooge (our family card game, like multiplayer Solitaire). Also happy father’s day to my dad, who is a pretty great dad and puts up our shenanigans with the utmost patience. As he’s said in his moment of greatest wisdom and poeticism, we’re “whack-a-did-daddy-doodle” crazy. Whatever that means I guess, love you lots! 🤷‍♀️❤️🤗😘 @doctor___dirt
The trail fam got together again this weekend and we did all the things thruhikers dream of being able to do- car camping with real pillows, lazy day hikes, long picnics with real food, naps in the sun after dipping in the Yuba... and staying at a ranch with dogs and baby goats. ❤️❤️❤️❤️ @laurareport @asphalpern
When @maddy_grubb1 and her friend Noah come through town, you go for a 11 mile hike and then end up in the completely wrong valley at the end. Maybe it’s a good thing we’re not hiking the Nevada Trail this summer. 😂❤️ Maddy and I met the first day and hiked into Ashland together before I got off with my bum knee, and I don’t think we were more than a trail day or two apart throughout California and she’s easily one of my best trail friends. 🤗 (On Northern Paiute land)
Happy Earth Day! I started the PCT today in both 2017 and 2018, and man, how I wish I could be starting again (even though my poor body hates me and it absolutely deserves a break). I think about and talk about the PCT constantly (sorry, not sorry) and I miss it and all of the people on it so much. Even though ‘normal’ life is pretty good now, too, and this year I’ll be able to see spring at home and the Desert Peach blooming. :) Happy Trailversary to @papercups @rickmarshall587 and @maddy_grubb1!! ❤️❤️❤️❤️
Happy Birthday, mom! 🥰@sageandblueskies We took a detour to Alkali Hot Springs on the Nevada Trail on our way home. 👍🏼❤️ (I’m not doing the whole thing this summer anymore, but I definitely still want to do a section or two)
Very cool clay slot canyons at Cathedral Gorge! 👍🏼
My name is Amelia Bryce Pease after Amelia Earhart, the Bryce Canyon, and some English pea-farmers a long time ago. I’m called Picnic Table after picnic tables. I’ve sat at many fine picnic tables in my life, now I’ve been to Bryce Canyon. I look forward to my life of becoming a pea farmer in England and discovering where Amelia Earhart’s plane crashed. 👏🏼
If you’ve been around since my TRT and JMT days, you know I make little videos sometimes of my hikes. 😁 I finally figured out the technical hiccups for my PCT 2018 video and finished editing and uploading it. This one is for Bend, Oregon to the Canada border, but if I met you anywhere and you were a significant part of my hike and I got pictures of you, you’re probably in it (some people I just didn’t get pictures of, especially in NorCal, whoops)! Link is in my bio or you can look it up. :) Anyway, if you want to see a pretty PCT hiking video and maybe see some of your favorite 2018 peeps and then cry really hard at the end, today is your lucky day! ❤️ I will be working on the California and Southern Oregon videos next.
Self-portrait for drawing class with planar analysis and contour. :) (does it look like me?)